Asus offers midrange performance in thin and lightweight gaming laptops like the Asus TUF Dash 15 FX517ZM-AS73. If you are looking for a capable gaming laptop for playing the latest AAA games at high settings without being too expensive, the new Asus TUF Dash 15 will be your great choice in 2022.

The Asus TUF Dash 15 FX517ZM-AS73 is an attractive thin gaming clamshell paired with an eSports-enabled screen and an Nvidia RTX 3060 graphics card with support for the latest Intel Alder Lake CPUs. 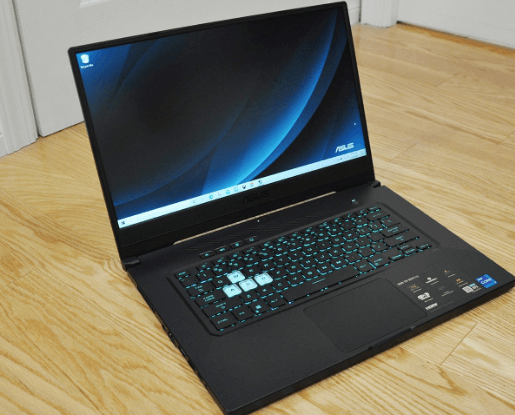 For starters, Asus’ TUF Dash 15 FX517ZM-AS73 gaming laptop is geared towards a budget audience who wants the best value. So while these products take a pragmatic approach to design and performance, the FX517ZM-AS73 is a masterpiece.

At just 0.8 inches thick and weighing just 4.5 pounds, this laptop is very thin and light for a gaming laptop. Both the keyboard deck and cover are made of beautiful gray-colored aluminum, so they don’t lose their stiffness for portability.

Don’t think you’re getting a unibody or anything because the floor is made of plastic. It’s still reserved for a much more expensive device. ASUS TUF 3060 laptop with a mecha-inspired design and less than 20mm thick.

The TUF Dash 15 has many ports under the sleeve, with two USB-A ports on the left. On the left is one more USB-A along with Thunderbolt 4, HDMI, Ethernet, a 3.5mm combo jack, and a dedicated charging port.

You can now charge the Dash TUF via USB-C while it has a dedicated charging port, but it’s not that fast. One of the great things is Asus finally reintroducing the webcam that was missing in the previous models such as ASUS ROG Zephyrus Duo SE 15 3080 and Asus ROG Zephyrus M15 2022.

The display is a Full HD panel with a 144hz refresh rate, which makes a big impact on esports, especially when paired with the RTX 3060. With 265 nits average peak brightness and 110% of the sRGB spectrum, the screen is bright and colorful enough for a single-player hit.

The bezels surrounding the display aren’t the thinnest we’ve ever seen, and they aren’t thick enough to distract from the gaming experience.

The Asus TUF Dash 15 is one of the first laptops released with the Intel i7-12650H Alder Lake CPU. This series of chips are specifically designed for ultraportable laptops that can operate at TDPs between 35W and 45W.

For graphics, Asus opted for the Nvidia GeForce RTX 3060 graphics card, which is a faster variant of the RTX 3050 Ti mobile card and is based on the GA106 Ampere chip. This GPU includes 3840 CUDA with increased ray tracing and tensor cores.

So if you’re looking for a cost-effective way to get into the world of ray-tracing and DLSS, you probably won’t easily get a better deal than this Dash 15. The RTX 3060 is based on Nvidia’s Ampere architecture, making it easy to implement second-generation ray tracing technology.

It will also significantly improve performance in games that support it. When turned on, while playing the high-end game it can appear at 68 fps thanks to Nvidia’s DLSS technology.

That’s the ideal fps you want, but it’s more than playable on Ultra settings. Considering that you can get such performance from a computer that can easily fit in a backpack, we consider it a win.

Compared to its predecessor, the 2022 TUF Dash 15 offers better airflow as it comes with an updated thermal design that includes an 84-blade arc fan. During demanding PC work and gaming, these fans create 13% better airflow to help keep your laptop cooler.

This also means that the laptop runs quieter than the previous generation, making less noise while gaming. A better chance to focus more on the game and win the battle.

Asus provides a good keyboard overall. And Dash TUF’s keyboard is no exception. Typing is comfortable with a lot of key movement given the laptop’s thin construction. I wish the lighting was a little different, but the individual keys are well spaced.

While there is no RGB lighting, another compromise for the price. It has a cyan backlight and instead includes a chiclet-style backlit keyboard with WASD (Hotkey) highlighted.

The 30dB quiet keyboard is a gaming console that allows you to play on the go, which helps reduce noise whenever you play on the go.

The key travel distance is 1.7mm, which enables fast input speed and fast key identification. Such precision input is very important when talking about games.

But what’s cool is that there are some truly useful dedicated keys above the keyboard. With a dedicated mic mute button and a button that opens the Asus Armory Crate software, you can control volume without having to sit awkwardly between the Fn and function keys.

The trackpad is fine. It’s big enough to use gestures and the click mechanism is solid enough, but for a gaming laptop, you’ll have to use a gaming mouse anyway.

Gaming laptops have the downside of short battery life, but Asus has improved its 2022’s model the Dash 15. The Dash 15 FX517ZM-AS73 delivers 10 hours of battery life. That said, this gaming laptop shouldn’t be a problem at all for working all day.

Additionally, it also comes with Dolby Atmos compatible 2 speakers, Wi-Fi 6, and Bluetooth version 5.2. It comes with a full-size HDMI port, an Ethernet port, and 2 USB-C ports for connectivity!

These two USB-Cs are versatile Thunderbolt 4 and 1x USB 3.2 Gen 2 Type-C with DisplayPort and power delivery. It also has 2x USB 3.2 Type-A ports, a 3.5mm audio jack, and a Kensington Lock. This TUF Dash 15 with the i7-12650H model has enough ports to support other devices.

The Dash TUF 15 is essentially practical with a comfortable keyboard and great battery life. That said, gaming performance is just the status quo for last-generation gaming laptops as the GPU has been cast to lower power levels.

As we’ve seen from our initial runs, not all RTX 3060 laptops are created equal. This runs relatively cool and quiet. The Asus TUF Dash 15 2022 plays the latest titles games at high settings, while Asus hasn’t fully solved the performance issues of a slim gaming laptop with the Dash 15.

Overall the Dash F15 FX517ZM-AS73 offers great gaming performance for the price. It’s just not a lot of upgrades over last-generation machines. But if you’re looking for a lightweight laptop with a premium screen and components that can handle high-end gaming at a good framerate for the price, the Asus TUF Dash 15 FX517ZM-AS73 is for you.

How long will the Asus TUF Dash 15 laptop last?

The average lifespan of Asus TUF Dash 15 is around 3-5 years. This is the long-term battery life and represents the overall life of the battery. After 5 years of regular use, Asus laptop batteries can only be charged for a short period.

How long will the Asus TUF Dash F15 battery last?

Is the Asus TUF Dash F15 suitable for gaming?

Yes the new Asus TUF Dash F15 is a masterclass that combines an achievable price with an elegant form factor. It has a powerful chassis performance that won't overwhelm you wherever you go. The FX517ZM-AS73 will be a great choice for gaming purposes.

Asus TUF 15 can run games like Call of Duty, GTA5, and Fortnite without any problems. Even the more graphically demanding games like Assassin's Creed Valhalla and Forza Horizon 4 will run smoothly.

Can I upgrade my Asus TUF Dash F15?

As you can see, there is only one SODIMM slot for memory upgrade. It comes with either 8GB or 16GB of soldered RAM depending on the configuration, expandable up to 32GB via the aforementioned slot.

Is your ASUS TUF laptop overheating?

The system is fast and does not heat up at all. What I've found is that the laptop gets clogged after heavy use and the fan needs to be cleaned from time to time to make sure the system isn't clogged. Open up your laptop and clean it as much as possible without touching it too much.

Does the Asus TUF Dash F15 have a microphone?

The laptop includes an array-style microphone system. You can also see the best Laptop with a Camera and Microphone.