The ROG Zephyrus DUO is Asus’ high-performance laptop subseries with two displays and has been significantly updated for the 2022 Gen in several ways.

The new ROG DUO GX650 has a 16-inch screen with smaller bezels and a choice of two unique panels. Asus then updated the hinge mechanism of the 2022 Zephyrus Duo 16 to minimize the gap between the two screens and stack them close together to look like one larger display. 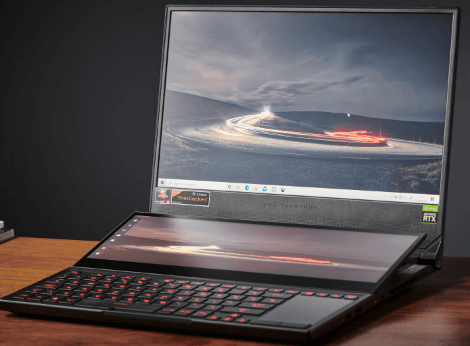 In addition to this, the inputs have been updated, a webcam with IR capability has been added on top of the main display, the hardware has been enhanced to the latest specs from AMD and Nvidia, and a MUX has been added to the overall mix.

With this approach, you get two displays, which are clear selling points for the series, but also affect overall ergonomics. With the keyboard positioned that way, you should use this laptop pretty much on a wide desk and less on the go or your lap. Also, the touchpad is narrow and different from what other laptops offer.

Also, having a dual display will affect battery life, so overall, We don’t think the Zephyrus DUO is as close to a desktop replacement series as the other members of the Asus ROG Zephyrus family and is not as performant ultraportables.

The novelty of this 2022 gen is the way the secondary screen moves when the laptop’s main display is lifted. Previously, you only had to tilt up at a limited angle, but not at the same time, so this secondary screen eventually tilted towards you more and the viewing angle was more familiar.

This mechanism also optically narrows the gap between the two screens, providing only a few millimeters of bezel space between them in normal use positions. Previously, this gap between the screens was much thicker and more aesthetic.

At the same time, in DUO 16, the space between the secondary screen and the main chassis is increased, so extra care must be taken not to get any foreign objects, cables, or objects between them. Mechanical sliding/tilting mechanisms also become more complex than in the past, which can lead to reliability issues in the long run.

Asus claims that the system has been tested and validated for thousands of tasks, but this design should nevertheless be used more carefully than a standard clamshell laptop.

Aside from these details, the 2022 Zephyrus DUO 16 looks quite similar to the 2021 model. It’s still black-themed, a rather neat design, the IO is still mostly left, towards the front of the laptop, with only a few connectors on the back edge.

This mini-led panel also supports a 240Hz refresh rate, fast response time, and Adaptive-Sync or GSync depending on how you set up the MUX on this laptop. That said, it’s great for gaming as well.

All this aside, Asus also offers the ability to disable zone lighting to create the uniform lighting you need when editing photos/videos or doing other precise image work. Of course, contrast and maximum brightness are affected in this model.

The best thing about the ASUS ROG Zephyrus Duo 16 (2022) is its secondary 4K display and variable resolution and refresh rate primary display options that can switch between 120Hz 4K and 240Hz HD, making it ideal for workstation/video editing/graphic design work, but also streaming.

The first option is the QHD+ 2560 x 1600 pixel mini LED panel with 10-bit color and 100% DCI-P3 color coverage, branded as the ROG Nebula HDR display, and is currently the near highest quality panel available in a ROG laptop.

The secret of this panel is that when choosing a resolution other than FHD native, you can choose between 4K 120Hz or FHD 240Hz mode without affecting the image quality in any way. This is possible thanks to an updated panel engine that can handle the 4 pixels of a UHD panel as a single-pixel at FHD resolution.

This screen option sounds interesting if the game is on your top priority list, but we need to test it more in real life to see if it’s as good as advertised and if it eliminates the blur and jitter that normally occurs. When running content and non-native resolutions.

Internally, Asus has updated the hardware specs for the 2022 Zephyrus DUO 16 GX650, choosing the AMD Ryzen Rembrandt 6000 platform with up to a Ryzen 9 6980HX processor.

The crash for the Ryzen 6000 comes with updates to DDR5-4800 memory and PCIe gen4 storage in one of the two M.2 slots available inside. The update for this generation is that the memory is no longer partially soldered to the motherboard. Instead, it has two DIMMs inside, and the laptop can be configured with up to 64 GB of RAM.

The CPU supports this effort by implementing a next-generation liquid metal compound under the brand Thermal Grizzly Conductonaut Extreme. This compound is tin-free and can further improve the thermal performance of “standard” liquid metals used in previous generations. Normal thermal paste is still used on the GPU side.

On the GPU side, there is an up to RTX 3080Ti 16GB dGPU. Asus uses Dynamic Boost 140W base power + 10W boost in the Turbo profile, raising the power setting of the Nvidia dGPU to 150W from the previous generation’s max of 135W.

There is also the ability to boost power up to 165W (140W base + 25W boost) in manual mode in the Armory Crate control app, as long as you have a bigger fan to cope with the extra heat.

Asus has also updated the new Zephyrus DUO’s internal cooling module and opted for a high-capacity fan coupled with a less disruptive intake between the ScreenPad and the chassis, increasing the airflow capacity of this design, as Asus calls it AAS Plus 2.0 30%.

Hopefully, this can make a difference in demanding loads, as the previous-gen duo was a bit hot in gaming and other combined loads. We’ll take a closer look at this section when we receive a review unit.

The novelty of the 2022 Zephyrus is the updated speakers, now the laptop has a total of six with two bottom-up tweeters and an additional set of dual force-canceling speakers.

For biometrics, the Duo 16 still doesn’t have a finger sensor, but Asus has implemented a camera with IR on top of the main display.

The battery hasn’t changed and it’s still 90Wh. The charger has been boosted to 280W with a slightly larger brick to meet the requirements of high-power hardware implementations. USB-C charging is still possible at up to 100W, even when you don’t want to pick up a big brick.

Overall, the updates for the 2021 Zephyrus Duo 15 SE and 2022 Zephyrus Duo 16 include small changes to the design language and input tweaks, but are particularly important, including a move to 16-inch displays with excellent panel options.

Hopefully, there will be a new hinge mechanism for the ScreenPad, updated hardware with high-powered graphics and MUX, and a thermal module better suited to handle this hardware in this kind of chassis.

The price of the ASUS ROG Zephyrus Duo 16 varies depending on the numerous spec options you choose. Below are some prices we saw within this range to give you an idea. Pricing may vary by retailer.

The new Asus Rog Zephyrus Duo 16 will most likely be the best DUO to date. At this high price point, the dual-screen design combined with everything else should put the Zephyrus DUO 16 on more maps than ever before.